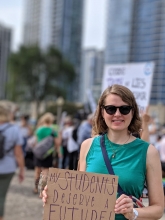 Associate Professor of English and Chair of the Department of Literatures, Languages, and Cultures

Professor Brokaw specializes in community performance; Shakespearen, medieval, and early modern drama; eco-theatre; and practice-based performance research. She is co-founder, co-producer, and co-director of Shakespeare in Yosemite, which produces free Shakespeare in Yosemite National Park every April, and features a combination of student, professional, and community actors. She also co-directs and co-produces UC Merced’s annual children’s opera, which brings 3500 area schoolchildren to campus every May to experience live performance. She acts, directs, and dramaturges in California’s Central Valley and, increasingly, around the world. Professor Brokaw teaches drama, medieval and early modern literature, Shakespeare, and children’s literature.

Professor Brokaw is the author of Staging Harmony: Music and Religious Change in Late Medieval Early English Drama (Cornell University Press, 2016), which won the David Bevington Award for best new book in early English drama studies. She is co-editor, with Jay Zysk, of Sacred and Secular Transactions in the Age of Shakespeare (Northwestern University Press, 2019), and the editor of the Arden Performance Edition of Macbeth (Bloomsbury, 2019). She is currently writing a book on Shakespeare in community performance, and several articles on Shakespeare and eco-theatre.